My trip to Kabir desert

Hot desert air was dripping through the cracks of an old Iranian taxi, when the driver who spoke only few English words was driving deep into Kabir desert. After traveling up north for a week, this was my gateway from the city life and a chance to explore the rural and agricultural part of Iran. 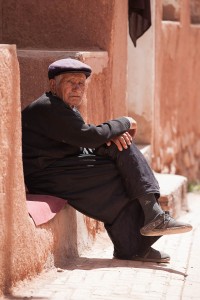 A man in an old village of Abyaneh, just outside Kashan.

Bus ride from Isfahan to Yazd took us only few hours, but it was a special culture experience. Locals love to talk with travelers, share their homegrown and homemade food and help them in all possible ways. I was sitting next to a man, who was driving home with his family, after visiting relatives in Isfahan. He spoke only few English words, but was keen to learn more. Stories about his work as a truck driver, who explored remote places of Iraq and Afghanistan, were holding me up despite late hours and inspired my trip to the desert. Questions like “Where are you from”, “Where in Iran have you been”, “Are you married”, “Do you have children”, “How much money will you spend in Iran” and “Do you like Iran” are normal for locals and every tourist encounters on them sooner or later. A lot of conversations might feel as interrogation, but at the round of questions they always end them with “Welcome in Iran”. In general people are friendly, some of them look like they would be scared of tourists, but they always try to help you, even if they do not speak English. Tourists are not a ordinary passengers on buses and on almost every journey you will get a local, who will try to start a conversation with you. At the end he will offer you a transfer, maybe even an accommodation at his house, because you are a “guest of Iran”, consequently his friend.

Next day I woke up early in Yazd and had couple of hours to spend till the departure of my bus to Khur. I climbed on the roof of the guest house, I was staying last night, and started to explore the rooftops of buildings and mosques around. On the endless city streets I met couple of German and Italian tourists and kids playing football, otherwise Yazd seemed almost deserted. “Photo, photo, photo” was echoed through the streets, when I met a couple of local kids who wanted to be photographed.

The sun was high already when I took off from the main bus station. As soon as I sat down, a local photographer from Garmeh, a small oasis near Khur, started a conversation with me and presented me his collection of photos from all parts of the country. His enthusiasm for researching diverse Iranian nature was overwhelming and his stories from traveling through Iran were amazing. When we arrived, he arranged me a cheap ride with an old driver in a perforated taxi. The car was probably glued together, but the wind, which was dripping through the cracks made the journey more pleasant. The road from Khur slowly faded away as we were driving deep into the desert and at the end only the signs were indicating where the road should be. Our final destination was a small family farm, where we were warmly welcomed with tea and dinner. Mud brick houses, with nicely decorated courtyards and charming family that lives simple yet fulfilling life. Despite harsh conditions, people mostly grow their own food and stables around the main buildings are full of camels, chickens, goats, sheep and cattle. We sat down in the lodge by the courtyard and drank tea till the sunset. Moon was, despite cloudy weather, illuminating endless desert hills and a hike around the premises was a pleasant conclusion of the evening. The family offered me an accommodation in a traditional Persian room, which was nicely decorated with rugs and colorful pillows, and was shared with a herd of mosquitoes. A big fan on the ceiling was mixing air in the room and made sleeping on a hot night a little more bearable. 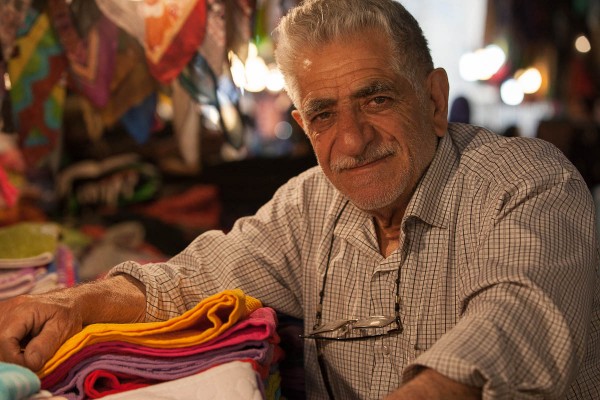 A seller at the bazaar in Kashan, Iran. 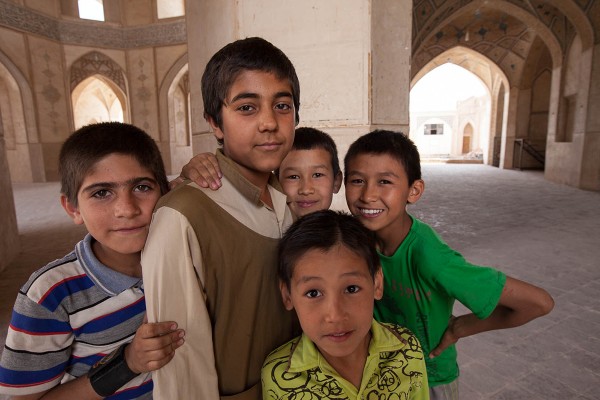 Kids playing on the streets of Yazd, Iran.

I woke up early in the morning, right as the shepherd began droving sheep on pasture and the farmers wife finished milking cows. As the sun began to rise, mosquitoes were replaced with flies and the only thing you could hear were the cows mooing. A treat from busy city life in which a peaceful moment is hard to find. The silence was interrupted by the farmer, who invited me to have breakfast with his family. Cheese, jam, bread, eggs, tomatoes, cucumber and slices of watermelon, all homegrown and homemade, even the bread. I never even imagined that the food grown in the desert tastes so good. After breakfast I took off to the desert, where I met kind shepherd, walked with him and his sheep for a while, wondered around the village of Mesr and watched as farmers were building irrigation systems. Fields of wheat are limitless and they have to work hard for a low yield. Water comes in a limited quantity, soil is dry, but their lives depend on the crop. Difficult conditions unite people, they help each other and they are more connected. Heat started to rise, so we went back to the house to cool down.

When we sat down at the courtyard the farmer asked me if I wanted to see his pets. I replied “Sure, why not”, as I expected to see a cat or a dog. The owner returned with a big jar, full of sand … and scorpions. He said they were captured in the house, not that long ago, even in the room I was sleeping. I amazed at the jar which separated deathly poisonous animals from us and the owner described details how they were captured.“How is life in the desert?” I asked. “Hard …” he replied and continued “we live a simple life and we focus on the things that really matter. Family, food and personal happiness. Mobile phones do not work, internet is miles away – only ourselves, our farm and the limitless of the desert around us”. We talked about their remote life in the desert, unaffected by current political affairs, and about lives of people in Europe. Soon after lunch, he arranged me a ride back to the city.

Before departure, his wife gave me a gift – small clay cup – and they wished me a pleasant journey through their country. Visiting the rural part of the country is always a completely different experience then wondering through the streets of main cities. Not just because of the architecture, but because people’s mentality on the countryside is not yet occupied with fast development as much as with the bare survival and their wellbeing. That is why Iranian countryside is, by my opinion, more interesting to travel then numerous of fast developing cities.