One way to Iraqi Kurdistan

Planning a trip to Iraqi Kurdistan could be challenging. Lonely Planets Middle East guidebook offers some limited information, but is outdated, as are information on the internet or anywhere else. The situation changes everyday and anyone thinking on visiting Iraqi Kurdistan should follow news about the region. I should also warn the reader, that visiting Iraq means entering a war zone and I only recommend doing that if you’re an experienced traveler.

I started my journey in Istanbul on 26th of March 2016. I took a 5am bus from Taksim Square (in front of Park Hotel) to Sabiha Gökcen Airport and from there a flight to Mardin (Pegasus, 2 hour ride, around 20 EUR/one way). I arrived in Mardin at 9am, took my bags and went outside the airport. I’ve read on the internet, that there should be busses (blue color) outside the airport terminal, but couldn’t find any. I later found out, that there are busses outside the airport complex (200 m from the terminal), but by then I was sitting in a metered taxi and on my way to Mardin bus station (otogar). The taxi ride took around 30 minutes and costed 58 TL (17 EUR).

Bus from Mardin to Dohuk

Mardin bus station is situated in the middle of nowhere, but looks quite new. Each bus company has its own ticket office inside and you should buy a ticket before departure. I asked around and was directed to Özlem Cizre Nuh bus company, which operates a line from Mardin to Erbil, but also stops in Zakho and Dohuk. The young salesman at Özlem Cizre Nuh ticket office didn’t speak any English and was not interested in my questions, so I didn’t even bother. I just said “Dohuk”. The ticket price is 60 TL (18 EUR) and the bus should leave at 11.00am, but is often late.

The bus ride is quite nice in the beginning, and as I remember, only stops in Midyat and Cizre (around 4pm). When it starts approaching the Syrian-Iraqi border, check-points get quite frequent and the bus must stop at every one. The bus operator collects passports from everyone and shows them to the military. At one time I was the only person who, accompanied by a solider with a AK gun, had to leave the bus and was searched from head to toe. I was also questioned for half an hour, my passport was checked several times and my backpack was searched, but I somehow convinced them to let me continue. 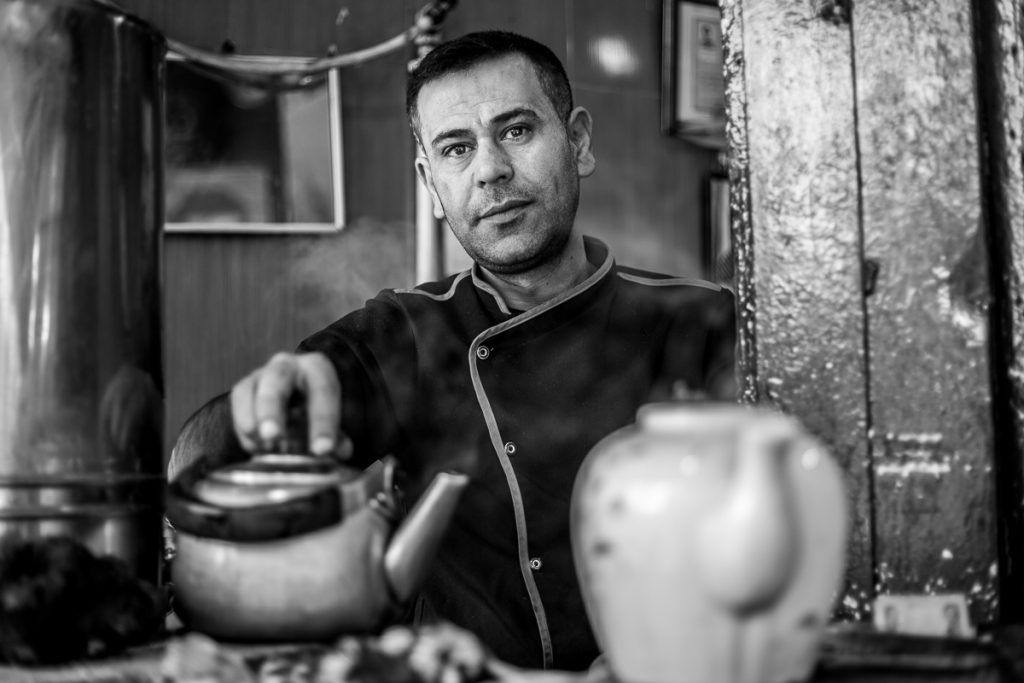 A tea / chai seller at the Bazaar in Sulaymaniyah, Iraq 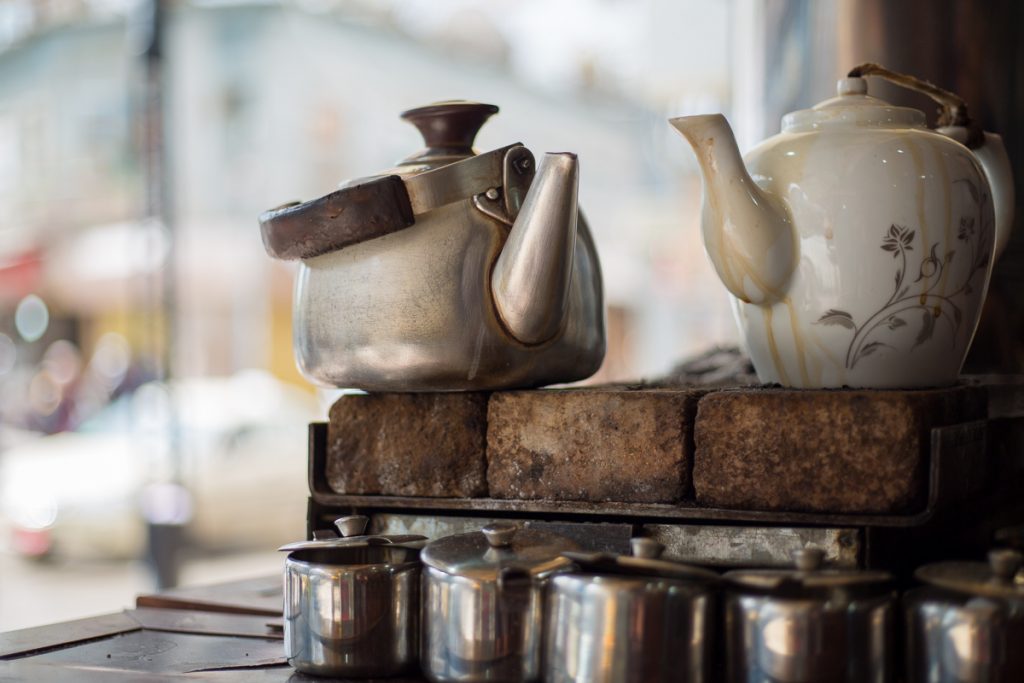 Couple of tea pots the Bazaar in Sulaymaniyah, Iraq 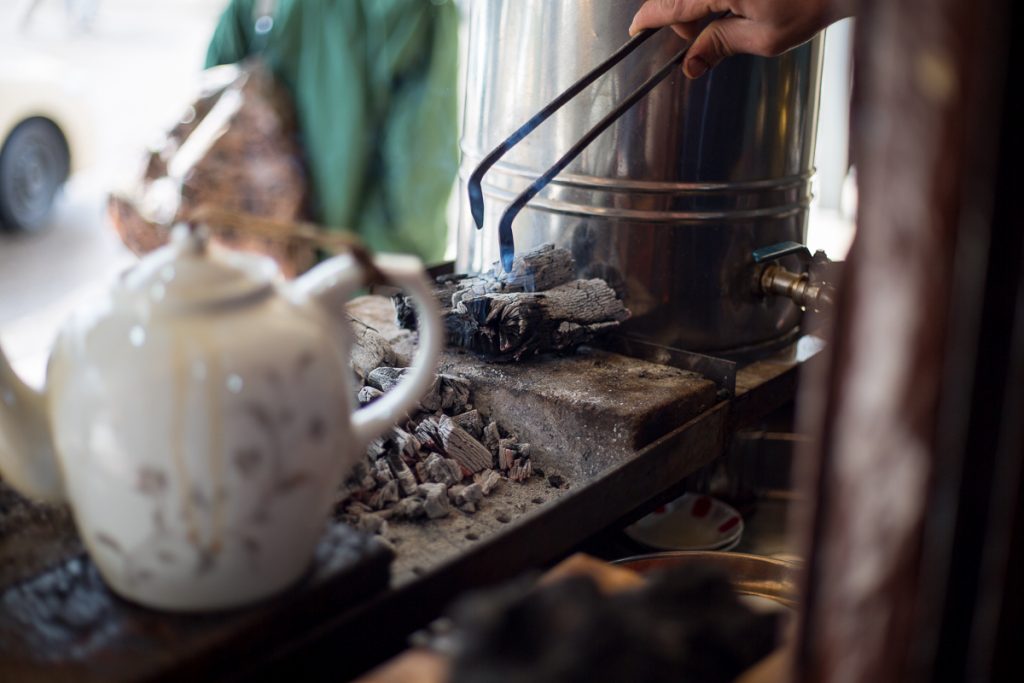 Couple of tea pots the Bazaar in Sulaymaniyah, Iraq

We arrived at the border complex at about 5pm. The process doesn’t take long. You have to leave the bus at the turkish border (without luggage) and get your passport stamped and the process repeats at the Iraqi border. The visa to Iraqi Kurdistan is valid for 30 days and is free (the officer even explained how I could extend it). Officers at the Iraqi Kurdistan border are very friendly, but you have to follow the procedure – first you have to get a “card” (right booth) which which you get into the line on the left. Wait in front of the left booth, when asked approach the officer and hand over your passport with the card you received at the right booth. After getting your photo and fingerprints, he’ll give you a 30-day visa and welcome you to Iraq. The bus will wait outside and you’ll drive right off.

We arrived in Dohuk after sunrise at 7pm. It was raining and the bus driver stopped at the crossroad far away from my hotel. I stayed at Hotel Parleman, which was recommended by Tripadvisor. The hotel is quite hard to find – just follow the main road and turn right at the Bazaar. Continue for couple of meters, turn right and go up the stairs. You’ll get a friendly welcome from a receptionist who speaks English by using Google Translate. Rooms are basic, with squat toilet and hot showers, and cost 20.000 dinars (16 EUR) per night. Owner of the hotel later welcomed me, bought me a kebab and offered me some liquor. He worked in Germany for a while and speaks German and English fluently. Next day I explored the city by foot (I don’t know if there is any other option). I walked around the Bazaar, which is quite nice, bought some sweets at bakery shops and had some tea with the locals, who invited me for a chat. People in Dohuk are very friendly and are eager to speak with foreigners.

Hotel Parlemans owner, who I met couple of days before, arranged a taxi driver for me. He picked me up early morning at the hotel and drove me to Lalish and later to Erbil. The ride from Dohuk to Lalish and back costs 50.000 dinars (40 EUR), but the ride from Lalish to Erbil costs just 30.000 dinars extra (80.000 dinars, 64 EUR), so I decided to take the second option. The taxi driver didn’t speak any English, but was eager to learn. He also bought some drinks and snacks. After arriving in Lalish he found a local, who showed us around. Don’t expect to see much in Lalish or you’ll be disappointed. Since the war zone in Mosul is near, the village is full of Peshmergas (Iraqi Kurdistan soldiers). We looked around, had a cup of tea with couple of soldiers and took off to Erbil via Mosul. We arrived in Erbil at 3pm and went straight to the hotel – Hotel Madera, which is situated in “New City”, 25 minute walk from Citadel and the Bazaar (taxi ride costs 3.000 dinars). The hotel looks new, is very clean and costs 40$ per night (western toilet, LCD TV, fridge, etc.), breakfast included (very basic).

Erbil (or Arbil, Hewler) is the capital of Iraqi Kurdistan and a home of many Westerns, who work and live there. The main attraction in Erbil is the Citadel, located above the Bazaar (entrance is on the opposite site of the hill). The complex is being renovated and is not worth visiting – you can not even get a view of the city, since everything is closed. Other things worth visiting are the Bazaar, which is quite big and very crowded, and couple of parks. Most of the bars are located in the part of Erbil called Aikawa – you can get a taxi from Madera Hotel to Aikawa for 5.000 dinars (4 EUR). Most popular bars there are T-Bar and German Beergarden and Restaurant (near T-Bar), which is operated by a german guy (price of one 0.5L beer is 12.760 dinars (10 EUR)). There are many restaurants in Erbil, mostly quite good, but very far apart, so you have to take a taxi every single time (day fee = 3.000 dinars / ride, night fee = 5.000 dinars  / ride).

I continued my journey to Sulaymaniyah, which is located near the Iranian border. I took a taxi (3.000 dinars) to “Sulimany Garaye” (a shared taxi parking lot from where taxis depart to Sulaymaniyah) and was on my way to Sulimany within 5 minutes (15.000 dinars (12 EUR) for one person). The ride was awful, taxi driver was in a hurry, overtaking other vehicles and speeding, we even drove through Kirkuk and stopped in the city (we had to leave a passenger there), but luckily arrived in Sulaymaniyah in one piece. It was raining heavily when we arrived and I had a hard time finding my hotel – Hotel Dolphin. Nobody knew where it was, I was soaking wet when I eventually found it – located in a narrow street at the end of the Bazaar (few meters in front of an underground garage). Rooms are small, but clean. Price for one person is around 30$ per night. Dolphin Hotel is very popular among tourists and you’ll see many at the reception using WiFi.

Hotel Dolphin is located near the Bazaar, which is a very interesting place. I suggest visiting it early morning, when things are being prepared – chicken slaughtered, vegetables cleaned, bread baked, etc. People at the Bazaar are very friendly and will welcome you inside their shop to take photos and look around.

The main attraction in Sulaymaniyah is an old prison – Amna Suraka (Red Security). Saddam Hussein’s intelligence services imprisoned, tortured and killed tens of thousands Kurds there. It opens at 9.am, closes at 12.am, again opens at 1pm and closes at 4pm. The main building is being renovated, but the military equipment (tanks, cannons, etc.) behind it are impressive. There is also a small museum inside, which is worth visiting. 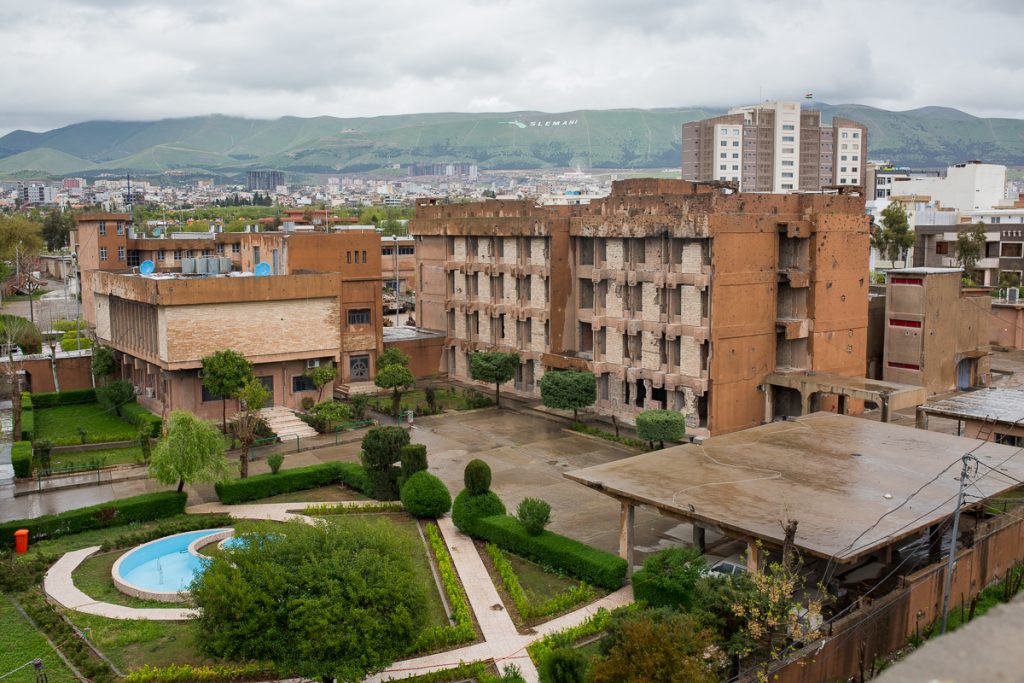 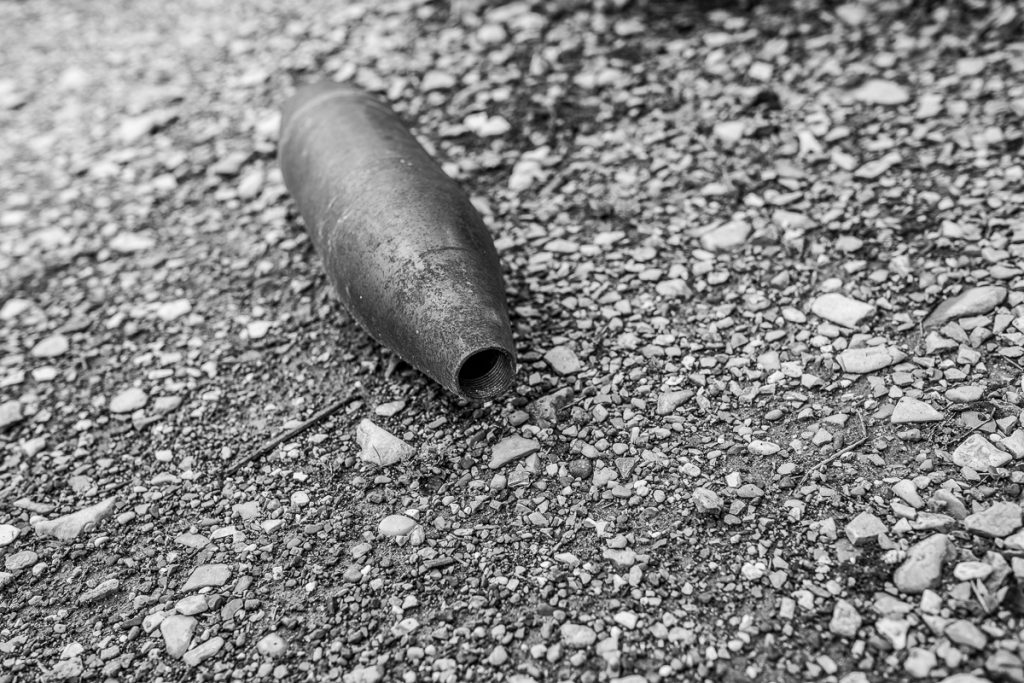 Finding a transportation from Sulaymaniyah to Sanandaj (Iranian Kurdistan) is a tricky one. There should be a bus that connects both cities, but I couldn’t find any – I asked around but nobody knew anything about it. The other option is taking a shared taxi – from Sarazu Garaje (Baghdad Garaje) to Panjewan (7.000 dinars / 5.6 EUR). When I arrived at Sarazu Garaje I just shouted “Panjewan” and they directed you to the right car. I arrived at 12am and waited only 5 minutes till departure (taxi leaves when it gets full). After arriving to Panjewan I had to take another shared taxi to the Border Crossing – it was parked near the intersection where the taxi from Sulaymaniyah stopped. The ride costs 2.000 dinars (1,6 EUR) and takes around 10 minutes. The taxi driver stops before the complex and we had to walk across – first into Iraqi Offices (procedure is the same as on the Turkish-Iraqi border), across the bridge and into Iranian Offices. Right after entering Iran everyone gets searched – passport and all of the luggage. A guy in front of me had an empty whiskey bottle inside his case and had to carry it back to Iraq. After that we entered the main building – that’s where you get questioned and searched again. I should note, that I already had an iranian visa inside my passport – you can not get a visa at the border crossing. 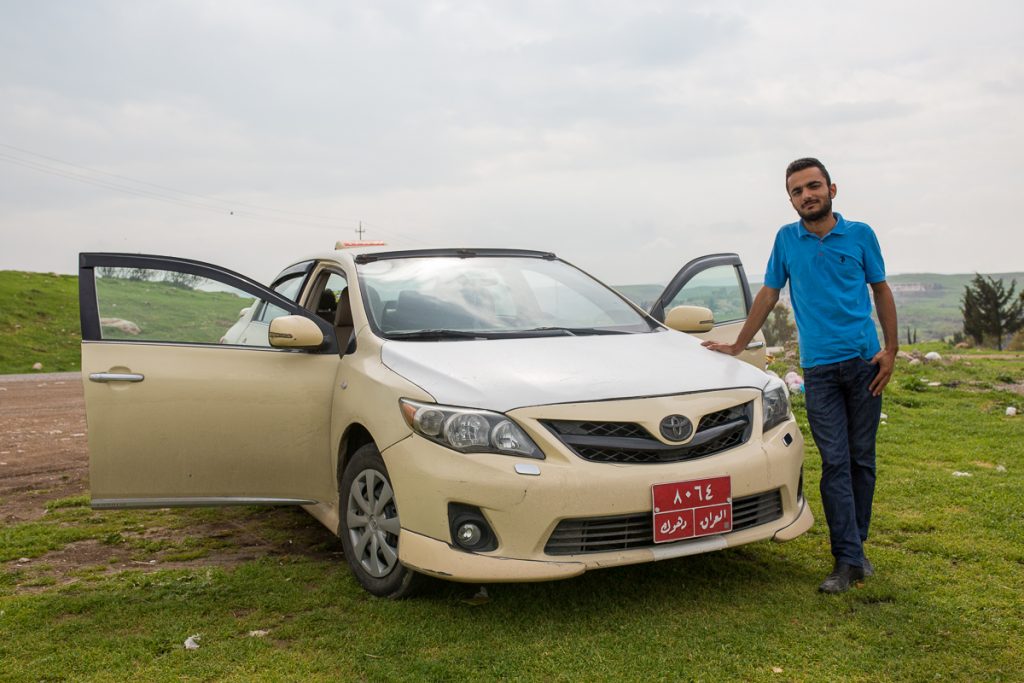 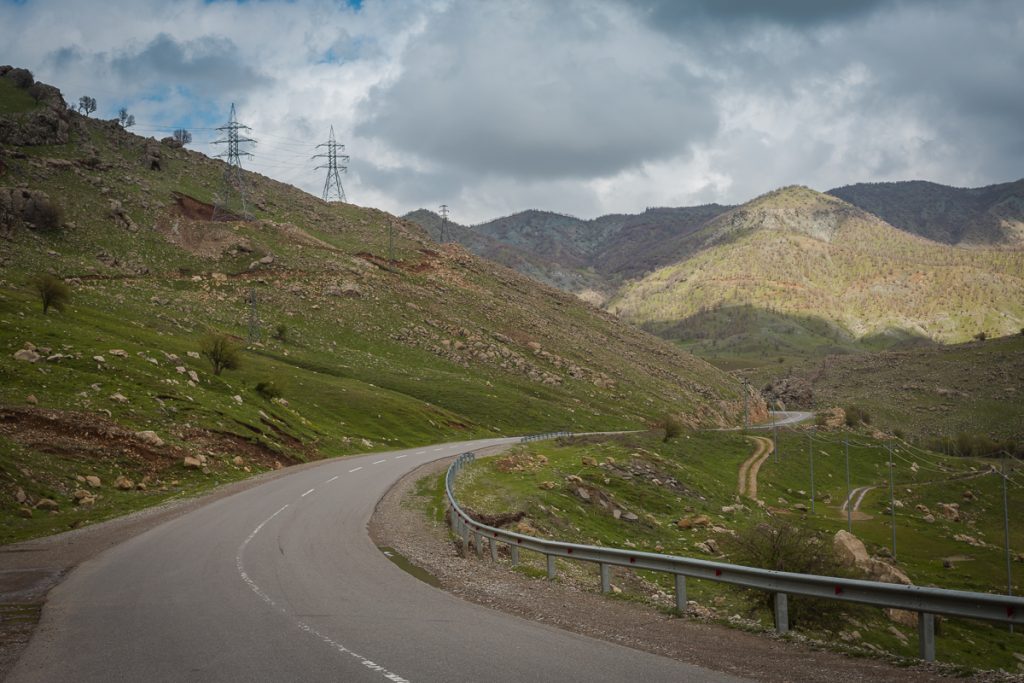 After exiting the main building I got approached by taxi drivers, money changers, etc. I just ignored them and went straight to the complex exit (aprox. 200m). I found a taxi to Marivan (Maradin) there, which costs 250.000 rials (7,3 EUR) and takes around 20 minutes. Marivan (Maradin) looks like a nice city and you might get a room there quite cheap, but I continued to Sanandaj straight away. I found a taxi driver (shared taxi) who agreed to take me to Sanandaj for 250.000 rials (7.3 EUR), the ride takes about 3 hours. I left Sulaymaniyah at 12am and arrived in Sanandaj at 7pm. After arriving in Sanandaj I went straight to the bus station and bought a ticket to Tehran for 440.000 rials (12,80 EUR). There are many bus companies operating at the bus station – look around, find the best one (ask for departure time and price) and buy the ticket. Buses to Tehran are quite frequent (one per hour), there are also buses to Esfahan, Tabriz, etc.

I continued my journey to Tehran and then through North-West Iran. Iraqi Kurdistan is an interesting place, a little bit expensive for that it offers, but nevertheless worth visiting. The highlights would definitely be Dohuk and Sulaymaniyah – very small but interesting cities with a great bazaar and friendly people. Amna Suraka is also worth visiting if you’re interested in history and are familiar with the fallen regime.

If you’re planning on visiting Iraqi Kurdistan and have any additional questions, you can send me an e-mail to [email protected] or private message on Facebook.